Ava with her mother and stepfather, Chelsea and Anthony Sallese. Chelsea said the community has been overwhelmingly supportive since Ava was diagnosed with cancer. 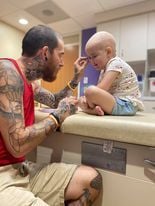 Ava does makeup with her dad, Andy Hawbaker, before a chemo date. Ava is expected to finish her treatment in September 2023. 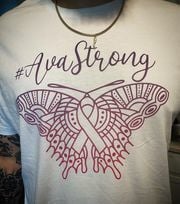 But this summer, Chelsea found themselves on the other side of the lawn.

It was in June that Chelsea and Anthony Sallese learned that their daughter, Ava, now 4, had acute lymphoblastic leukemia, a rare type of blood and bone marrow cancer that affects white blood cells.

Ava’s biological father, Andy Hawbaker, is a bartender at Rustic Road Brewing Company. He said he got a call from Chelsea saying they took Ava to the doctor after her lips turned blue and she had stomach problems.

After learning the diagnosis, “everything just changed.”

“It sucks, but we’re doing it,” Andy said. “Ava is always happy, so it’s hard to be sad around her.”

Despite the bad news, Chelsea said the community quickly mobilized to help the family. Fundraisers at Kaiser’s Pizza, Khroma Nail Salon, Coins and many other places were all held to benefit the young family.

“It’s overwhelming,” Chelsea said. “We are so proud to be a part of not only Kenosha, but the downtown community as well.